It was about three years ago when Uma first messaged me online after reading my blog. Originally Iranian-Malaysian, she’d grown up in Australia and had always had a deep interest in Iran. She wanted me to elaborate on my experiences there, and encouraged my endeavour to open a space for communication and empathy between our communities; having many Saudi and Palestinian friends in Australia, she too took issue with the long-standing fable of an inborn and perpetual hatred between Arabs and Iranians, or between any peoples for that matter. We engaged in lively and lengthy discussions on these topics, and brainstormed about potential projects we could jointly pursue one day to challenge the dangerous prejudices and stereotypes that have become such a firm fixture in minds region-wide.

Our chat topics grew to our interests, families, aspirations, pet peeves, and pretty much everything under the sun. I always looked forward to reading Uma’s messages when I’d see them pop up on my phone; we increasingly found that we had an unbelievable amount of things in common. The conversation continued until well after I left Iran, and when Uma mentioned she was soon travelling to France for a 7-month teaching placement, we promptly decided to meet somewhere in Europe. We eventually settled on Portugal, a country we both really wanted to visit.

The planning process took place incrementally between emails, messages, voice-notes and various time zones. As we started firming up these plans and receiving our flight confirmations, Airbnb reservations and the whole shebang, the peculiarity of the situation began to dawn on me. Not that I was travelling to another country with an online pen pal that I’d never met; but the very fact that it all felt like the most natural thing in the world. Of course, this wasn’t the case for everyone. My sister could barely hide her trepidation, and was categorically convinced I was the victim of a long-term “catfishing” scheme. My mother, by now more than used to my less than conventional way of doing things – but also clearly unnerved by the prospect – wondered aloud why I couldn’t just travel with friends that I had already met. Both though, as always, were ultimately supportive – with the caveats that I would send a message the moment we met and I confirmed her identity, check in periodically, and send a photo of us together as soon as possible.

And so the day finally came. We’d luckily managed to find flights that landed us in Lisbon within half an hour of each other. After a brief spell of superfluously searching in opposite sides of immigration, we managed to locate one another. It truly felt like meeting an old childhood friend. Our adventures began immediately, and we quickly discovered that our bond, far from being limited to the virtual realm, transcended it greatly. As we spoke in person for the first time while navigating the city through Uma’s Brazilian Portuguese and my lacklustre command of Google Maps, our intersecting interests, ideals and idiosyncrasies multiplied. It even turned out that her family shared the same reservations about our meet-up; her sister had made half-joking comments regarding my potentially false identity that very closely resembled those of my own sister’s about Uma.

There were, unsurprisingly, one or two hiccups resulting from our unfamiliarity with each other. Namely, I had reserved one of our accommodations in Almada, a charming municipality across the Tagus River from Lisbon with great views of the capital and most conveniently reachable by ferry. Unbeknownst to me when I was booking, Uma suffered from debilitating motion sickness. I’ll never forget her look of  muted horror as she registered that we’d be riding a ferry multiple times over the 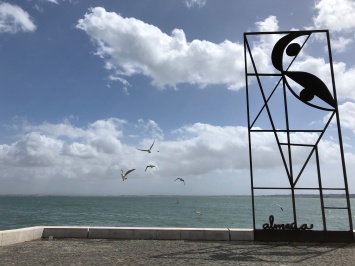 course of the trip.
Nonetheless, while I was busy feeling awful about my choice of lodging, she took it in her stride, put in her earphones and braved each ride gracefully – including the one where we had to flat out sprint across the wobbly platform to catch the ferry after a stand-off between myself and a tenacious ticket machine. We ended up falling in love with the serene atmosphere of Almada, and made some precious memories there.

The next three days between Lisbon and Porto were a whirlwind of laughter, impromptu adventures, chance encounters with eccentric strangers, long walks along winding cobblestone pavements, and a particularly jerky ride on Lisbon’s Tram 28 that felt more akin to a journey on Harry Potter’s Knight Bus (which definitely didn’t help with Uma’s motion sickness). This was actually quite fitting as Portugal is strongly linked to the book’s provenance, with JK Rowling reportedly finding the inspiration for her stories during her years spent in the architecturally enchanting Porto. While in that city, we dutifully visited the Livraria Lello, an ornate bookstore dating back to the late eighteen hundreds and on which the author is said to have mirrored Hogwarts. We spent the rest of the day walking across the picturesque city and stumbling haphazardly upon its many gems.

As I came to find on this trip, there is something so simple and yet so wonderful about discovering a new country and culture with an unfamiliar companion, and through the prism of a new and growing friendship. On our last day in Porto, we both felt as though we were parting ways with a life-long friend or family member. Ahead of Uma’s trip back to Nice that night, we decided to go to a restaurant where we could hear some Fado – a powerful form of traditional Portuguese music

characterised by its melancholic nature. After mistakenly thinking the restaurant we chose was one minute away and realising it was in fact closer to twenty (a new record for my Google Maps illiteracy), we ran non-stop through the pouring rain to put us on a good footing for Uma’s impending flight. We managed to make it in decent time, find seats with a good view of the beautiful Fado singer and her band, and eat some scrumptious spaghetti while we were at it. Like most of our other memories from the trip, that night is etched into my mind, and is a bottomless source of elation whenever I think back to it.

The next day, I boarded my flight back to London with a deep sense of peace and optimism. A chance connection, sparked by a digital message sent from thousands of miles away, had grown into a meaningful and loving bond between two people who had never before met; two people from backgrounds that, by today’s standards, are meant to pit them against each other. More than ever before, I lamented these artificial barriers we construct between each other that carry no meaning or benefit to our lives. Indeed, they critically stunt our collective progress and preclude us from perceiving and participating in all the magic this world has to offer. Though this notion may already exist in many of us, it is easily drowned out in the rush of everyday life and its all-encompassing but often inconsequential concerns. Thank you Uma for reinvigorating these ideals in my mind years after I left Iran, and for initially reaching out and starting our friendship – hopefully an everlasting one.