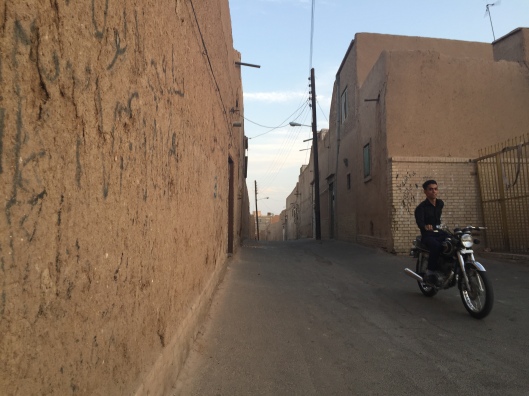 Whenever I’m feeling particularly disheartened about the political situation in the Middle East, or read commentary and views that are frankly worrying for the state of humanity, there are certain people, places and memories I like to reflect on that put me back on a positive track. For me, encountering the kindness and moderation of hitherto strangers in Iran – and likewise throughout the Middle East – while it may be argued as having no effect or consequence on the turmoil transpiring on a wider scale, is still a welcome reminder that the current state of affairs is far from the desired one for what is certainly the majority of the region’s inhabitants. One such memory is from my recent journey back from Yazd in central Iran.

As my friend Alice and I rushed into the train station – typically late – we began flat out sprinting to catch our train back to Tehran which was departing in a couple of minutes. By sheer luck, we made it onto the train seconds before it left the station and, gasping for breath, stumbled into our compartment. Confronted with four pairs of curious eyes staring back at us, Alice and I quickly realised that there would be six of us travelling in the modestly-sized compartment, contrary to our expectations. As we were on a 9-hour long sleeper train, I wasn’t quite sure how it would go – or even where we would all fit come bedtime. Nonetheless, before we even started picking up speed, my slight apprehension began to dissipate.

Our fellow travellers consisted of a young student, a middle-aged, conservative woman (if one is to judge based on rudimentary factors such as clothing, which was incidentally a chador), and two ladies from Yazd. After kindly helping us find the most convenient place for our luggage, our new companions sat back down and we all began offering and exchanging snacks with each other. I settled down into my book, and as I felt my eyes begin to droop shortly after, I looked around and realised that the transition to sleep mode was a mutual desire. I followed the others’ lead as they began opening up the fold-out beds layered on the two sides of the compartment. Being the smallest two, we all communally agreed that Alice and I would take the top two beds; as the hinges of the steel ladder that led to my cot began to shift during my ascent (I knew I had eaten too many snacks), the ladies all speedily rushed towards me to stabilise it, and proceeded to cheerfully hold it in place whenever we used it during the remainder of the journey. After we passed around the provided bags containing the blankets, pillows and so forth, one of the Yazdi ladies switched off the light and I swiftly fell asleep. In what seemed like no time, we were awoken to loud knocks and repeated calls from one of the crew-members who was pacing the train to inform the sleeping passengers that we would soon be arriving – quite harshly I thought, but then again I had just woken up and was admittedly cranky. Accordingly, still rubbing the sleep from our eyes, we helped each other pack up, put on our headscarves, chadors, etc., said our warm goodbyes, and went on our separate ways.

Others may find this exchange unremarkable. What I found heartening, however, was that a situation that might under other circumstances be at least a bit uncomfortable (a group of tired strangers in a small, confined space) was in fact in this case very congenial and even enjoyable. In this day and age it can sometimes be hard to relate even to those of the same background or social context, therefore – without meaning to exoticise it too much – it is quite comforting when something as simple as a train ride becomes an opportunity to show unconditional kindness to others. Although we didn’t speak that much, words weren’t necessary to perceive the warmth and friendliness of these women, which went far beyond the Iranian custom of being welcoming and hospitable to foreigners.

Another mental ‘happy place’ of mine is the thought of my next-door neighbours, whom I have discussed in previous posts and whose compassion and attention similarly go far deeper than the surface of ta’arof (the term generally used to describe traditional Iranian hospitality and etiquette). The lady of the house, Shohreh, cares for me as she would her own daughter, and indeed regularly expresses that she considers me as such. Furthermore, there are those at my university – for instance some of the administrative staff and members of the faculty – who regularly check on me to ensure I’m not experiencing any problems or difficulties here. As I’ve mentioned earlier, I have yet to witness any form of bigotry as a result of my nationality. However, being the only Saudi Arabian in my programme, I believe their concern and consideration stems from wanting to make sure that I am comfortable here. On a related note, before I left Iran for the summer holidays, a jovial member of the university cleaning staff who I’ve developed a rapport with asked if I could bring back two prayer rugs from Makkah – one for him and one for his wife – as he didn’t think he would ever get the chance to make the pilgrimage during his lifetime. Regardless of how many times I tell him it was my pleasure and was no bother at all, his gratitude is boundless.

My local gym is another one of these places that grounds and reminds me of my main purpose of being here. Although, like many other people, the gym has always been an ‘in and out’ sort of place for me, I’ve found myself making friends there, overcome with the geniality and sociability of other gym-goers as well as staff. There is no doubt that other gyms around Tehran offer a more clinical, impersonal ambiance, for instance in the more affluent areas; nevertheless, mine is without a doubt the most unique gym atmosphere I’ve experienced so far. My group class instructor – an animated woman with a distinct 80’s style in both clothing and music – has taken me totally under her wing. At one point, when she noticed I was coming down with a cold, she insisted that I purchase some shalgham to boil and eat in order to boost my immune system (a subsequent trip to the vegetable shop taught me that shalgham translates into turnip – a remedy which really did help). In that instance, the other ladies in the class started chiming in with their own suggestions; on other occasions, the conversation would revolve around what Iranian dishes would be the simplest for me to try cooking, and similar thoughtful as well as humorous topics.

Thinking back on my time here so far, I realise just how much I’ve deeply interacted with and become friends with those previously known as ‘strangers’ – more than in any other country I’ve lived in (only two, but still). There are some logical reasons for this. As previously mentioned, the boundaries between unacquainted people here are not as defined as they are in many other countries; this is especially true when you factor in the local fascination with foreigners. Moreover, I personally enjoy talking and engaging with new people from different walks of life – sometimes in the most random of ways – and being in constant student mode here, I welcome any and all opportunities to practice my Farsi. Whatever the causes, I’ve ended up with a broad support system, something of an extended family even, in a country where I arrived knowing no-one. Although it’s still months away, I already feel how much I will miss this wonderful network of meaningful bonds that resides somewhere between the ill-defined realms of acquaintances and close friends.

Going beyond strangers in Iran, something I must mention when considering sources of inspiration and reassurance is the extensive support I have received from countless people all over the world – and particularly the region – after France 24 published an article about my experiences in Iran. Being contacted by all these people who want nothing more than to offer words of solidarity and encouragement is invaluable to me, specifically when it is juxtaposed with a seemingly downward spiral of violence and intolerance on a larger scale in the Middle East. The recent events in Paris seem to depict a singular representation of our region to the rest of the world that imposes a sense of malice, despair and hopelessness. Undoubtedly, as this above-mentioned support has demonstrated, there is much more to it than that. While I started writing this piece before that dreadful tragedy, its occurrence only solidifies my belief that it is upon the moderates of this region to be more aware of each other, connect with each other and in general raise our voices louder than the white noise of destruction around us. May we all see peace within our lifetimes.